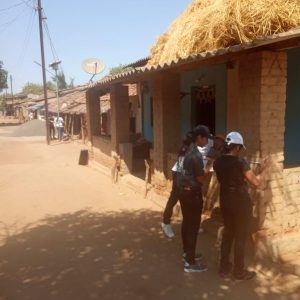 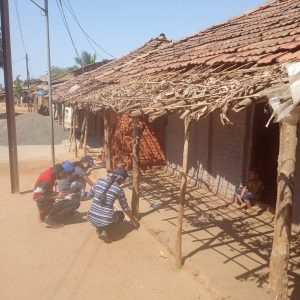 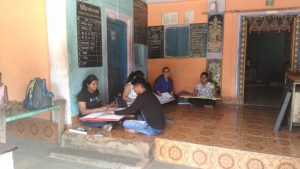 Kalidhondh is located approximately 2 kms from Jawahar city in Palghar district , Maharashtra. the city is easily accessible from Nasik city where our center for design is located. Jawahar is famous for its picturesque location and a vibrant culture. Most of the local padha around are set in traditional architecture setting and focus on rural crafts such as warli paints and paper mache sculptures.

Kalidhondh has a population of 200-250 people and has around 50 houses settlement. The name of the padha has been derived from the presence of black basalt stone in sub soil of the region. Most of the houses are made from locally available material. Two main streets were identified for the study purpose. Both streets had unique characteristic in relation to use of material and architecture style.

Students were made aware of various strategies of taking measurements of structure. Identification of various services and amenities. Identification of local flora and fauna was also part of the survey. On day one, groups were identified to measure individual houses and measure overall streets. Two groups were set to interact with local residents to understand the socio-cultural scenario .

Students were able to extract a large number of information in the short span of time allocated. Mainly in relation to construction technology with local materials, streetscapes and cultural issue.

On last day the students got a hands on experience of paper mache sculptures. They were keen on understanding the process of how scrap paper can be converted into pieces of sculptures. As the final outcome students made individual art pieces.

This settlement tour made the students aware of the various intricacies involved in architecture design and importance of local material use. The importance of climatic response to save on natural resources and use of passive strategies to achieve suitable human habitat conditions 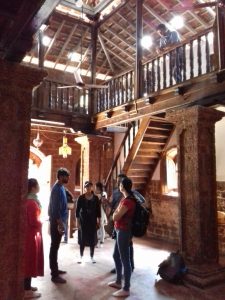 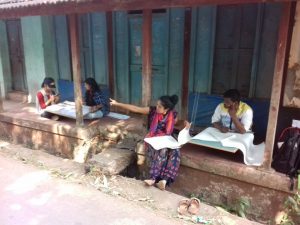 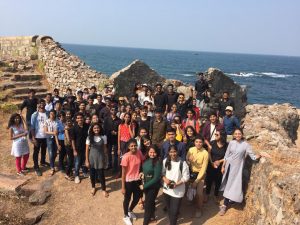 The annual design settlement tours are planned for making students understand our traditional settlements. The students are guided to document and measure important features of town planning like streets, nodes as well as individual buildings. Generally places with historic importance or significant crafts tradition are chosen. The local buildings at such places exhibit vernacular architectural styles that teach students traditional wisdom of our ancestors. The towns are intentionally selected in varying climatic zones that equip students for designing in different conditions after practically experiencing the climatic differences and local architecture.

This year, the second year architecture settlement study tour was taken to Malvan town in Konkan region. The students documented the settlement of Malvan, understanding the local construction techniques and materials. The architectural planning evolved from culture and responding to climatic conditions was crucial to understand. The students measured important public buildings like schools and temples. Old wadas Residential streets and market places were also documented. Coastal climate and locally available laterite stone largely governs architecture of the region. In addition, richness in detailing, carving, and wooden lattice work in this semi-urban settlement stands out and confirms its rich past during shivaji’s regime. However, Malvan faces a huge migration problem and currently houses 80 % ageing population. Tourism sector is developing in the town, due to newly introduced scuba and other water activities which might boost the town’s economic condition. Local cuisine is another tourist attraction that is availing opportunities.

The design problem based in Malvan is aimed at tackling all these issues as well understand the response to climate and culture. Students developed four design programmes based on their observations and experiences in Malvan. A promotion centre for local culture and food, ocenarium to promote sea-based activities, a memorial for shivaji maharaj who build his landmark sea fort sindhudurg in close vicinity and a resort for handling tourist influx are the varied design projects being tackled in the semester. 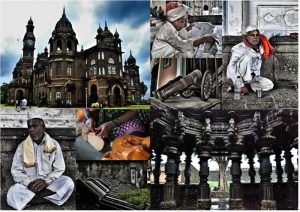 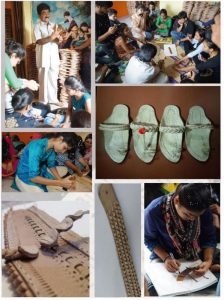 Craft And Cultural Documentation seeks to capture and preserve the cultural heritage of people in the city. This year, 3rd year bachelor of design students studied the craft, culture traditional architecture of Kolhapur, historic city of Maharashtra. Product Design students documented the famous craft of Kolhapur, The Kolhapuri Chappal and silver jewelry making. They documented with respect of understanding ergonomic aspect and various types of tools. Worked hands on the making of chappal with various innovative designs by using traditional technique and motifs. Interior Design students documented and measured the wadas by understanding traditional technology details and style. Set Design students understood the Kopeshwar Temple, its style and typology and also documented the wadas, where they learnt about the space utilization and also interacted with a member of Baburao painter. There were intense interaction with Ar. Waichal and a set designer Mr. Prashant Bidkar. To get the feel and roots of Kolhapur culture the visit ended with understanding the heritage buildings of Kolhapur like the Bhavani Mandir, Shahu Maharaj Palace and Old Palace. 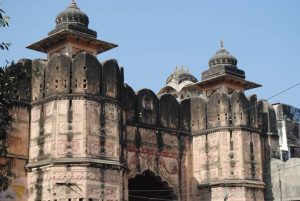 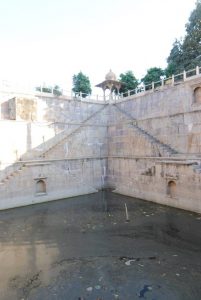 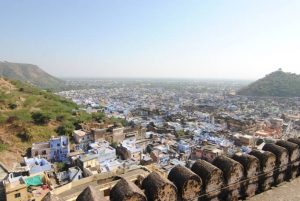 The quaint town of Bundi is engulfed by hills of Aravalli range on its three sides. Unique to otherwise desert landscape of Rajasthan, the town with its fort are confined by a city wall encircling its periphery. Apart from brilliant response to topography in town planning , numerous stepped wells are dotted all through the town. These efforts are evident of intelligent water management our ancestors adopted in this dry and arid region. In addition to celebrated gateways in outer city wall, a unique feature was several small gateways across small alleyways guarding each neighbourhood within the city itself. Not as hounded as other cities of the state, Bundi offers an unusual local experience. The quiet yet interactive streets and inviting narrow alleyways exhibit to tradition and culture. The entire ensemble still preserves an old world charm that is not contaminated by heavy tourist influx. The site proposed for the inn houses one of such alleyways with a gateway; to be used to its full potential. 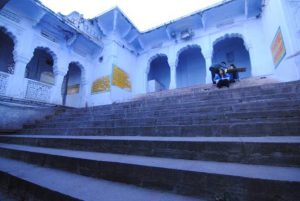 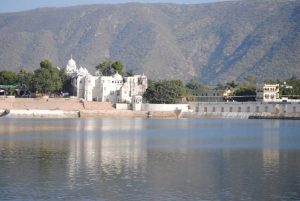 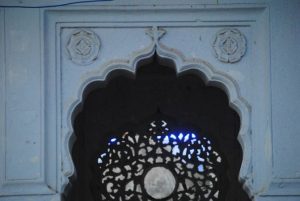 Pushkar is a town bordering the Thar Desert, in the north-eastern Indian state of Rajasthan. It’s set on Pushkar Lake, a sacred Hindu site with 52 ghats (stone staircases) where pilgrims bathe. The town has hundreds of temples, including 14th-century Jagatpita Brahma Mandir, dedicated to the god of creation, which has a distinctive red spire and walls inlaid with pilgrims silver coins.

Study Tour To Historic Locations Of Badami And Hampi 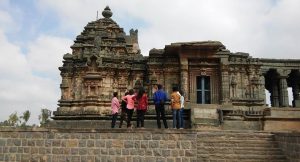 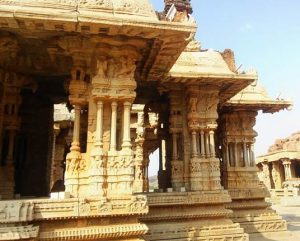 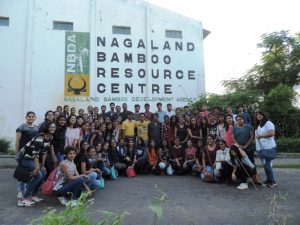 The annual design settlement tours are planned for making students understand documentation and measurements of towns and villages. Generally places of historic importance or crafts tradition are chosen. The local buildings at such places exhibit vernacular architectural styles that teach students traditional wisdom of our ancestors. The towns are intentionally selected in varying climatic zones that equip students for designing in different conditions after practically experiencing the climatic differences and local architecture.

This year, the second year architecture settlement study tour was taken to historic town of Badami. With strong historic base dating back to third century, Badami boasts of being the capital of 5th century chalukyan dynasty. The first Hindu cave temples make the town one of important sites for studying of rock cut architecture.

The students documented the historic settlement of old Badami, understanding the local construction techniques and materials. The architectural planning evolved from culture and responding to climatic conditions was crucial to understand. The concluding design project in the current semester incorporates designing a civic centre for up gradation of the town. The project falls in line with central government’s HRIDAY initiative for heritage cities. This gave them a live project experience.

Apart from on site documentation, a history tour for understand temple architecture of south India was also planned. On site history sessions gave the students a better perceptive of temple terminologies than classroom lectures. Students enthusiastically worked on history assignments due to the hands on experience to feel, sketch and photograph historic places. On site history classes were conducted at places like aihole, pattadakal, Lakkundi and hampi to understand temple architecture through different dynasties.

A visit to Bijapur took care of the indo-Islamic architecture in deccan plateau – a major portion the history of architecture syllabus in second year was covered on these on site classes. All the study of history is documented in report format with scaled drawings of visited temples and mosques as well as photographs and sketches of all places.