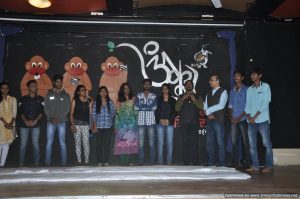 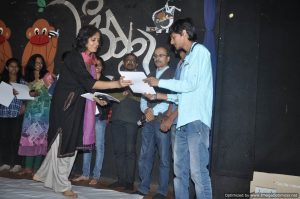 In 2015 Ankur showcased 100 films which included feature-length films, short films, documentaries and music video which covered a host of socio-cultural themes. The films covered many issues of gender, violence, environment, poverty, social inequality, parenting, old age, etc. The film was inaugurated by the noted film-maker Nishtha Jain from Mumbai who presented her documentary, ‘Gulabi Gang’. She later interacted with the audience which included our students on issues shown in the film on domestic abuse and violence against women in India. Another highlight of the festival was a film on Kabir entitled ‘Had Anhad – journeys with Ram and Kabir’ by Shabnam Virmani from Bangalore. The ambience and the backdrop for Ankur film festival done by the students as a response to the central theme of the event using environmentally friendly materials. 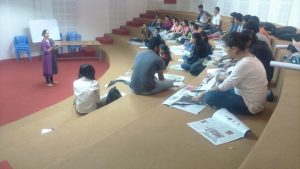 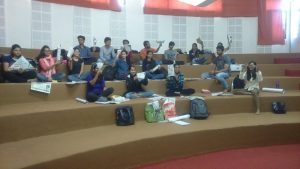 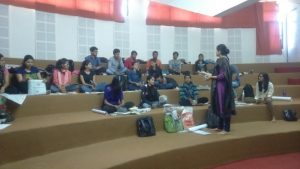 Kalyani Khodke conducted a four days’ workshop on an approach to innovate and use innovative thinking process to identify opportunities and solutions for design students. Tools for innovation were tried hands-on to understand how to use those tools in the process. How to identify the need and come up with innovative solutions. The challenges were identified around and within the campus of the institute. 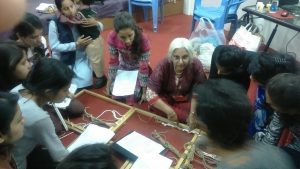 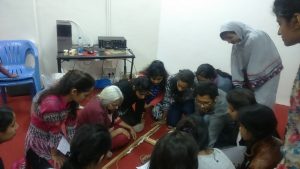 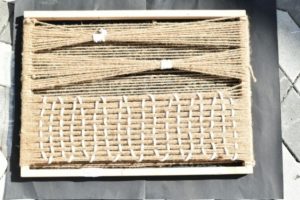 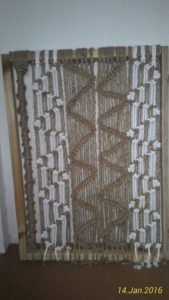 Dr. Padmini Balram conducted a four days’ workshop on linear elements in Textiles for B.Des Interior design students. On day one Dr. Balram demonstrated various weaving and knotting techniques such as plain weave, basket weave etc. by using jute and cotton nadas as materials along with their applications in interior and furniture design. Under her guidance, students explored a variety of materials and techniques. On the second day, the workshop culminated in hands-on creation of interesting patterns of small-sized blinds by the students which could be used as window elements or combined as partitions. Dr. Padmini Balram has done her Ph.D. CEPT University, Ahmedabad.  She has 35 years of research experience in the areas of Natural Dyes, Traditional Textiles, Crafts and Tribal Textiles of India, Asia and the West, Creating Modern and Innovative Textiles based on traditional skills and experimentations to suit the present markets. Currently, she is a professor of design at Shipa Sadan, Sriniketan, Vishwa Bharti University, West Bengal.