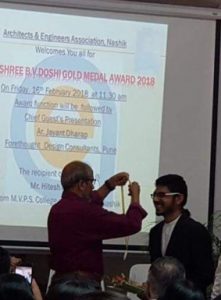 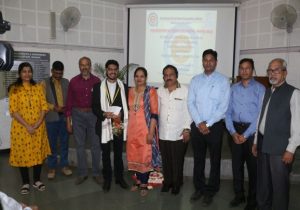 Hitesh Panjawani, a final year student of the academic year 2016-16, was felicitated with B.V. Doshi Gold Medal Award for the year 2018 in the hands of Architect Jayant Dharap in a program organized by Architects and Engineers Association, Nashik. The award is given every year to a final year architecture student for the excellence in final year thesis project. On this occasion Architect Jayant Dharap gave a presentation on his projects on landscaping and kinetic sculptures. Ar. Dharap is principal architect of Forethought Design Consultants,Pune.  The awardee also gave a brief presentation on his award winning architectural project named, ‘The Last Shadow’. Principal Dr. Prajakta Baste, faculties from B.Arch and members of the association witnessed the event. 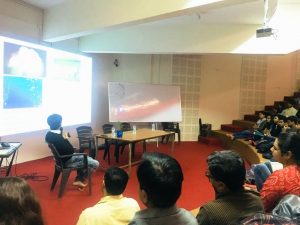 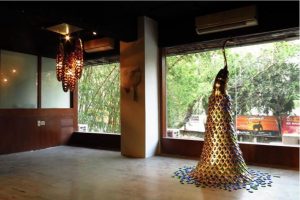 Shailesh Rajput a product designer  and alumni of M.V.P.S.’s College of Architecture, Nashik interacted with first and second year architecture and product design students. Shailesh Rajput is a Principal Designer at Shailesh Rajput Studio that specialises in bespoke lighting installations, lifestyle furniture, sculpture, wall murals & installations in hand blown glass, brass, and copper.  Through the demonstration of his own projects, he explained the concept of biomimicry and biomorphism to the students. In a very informal way, he had an open dialogue with the students where he shared his journey from a student to a professional. Shailesh Rajput inspired students to put life and soul into everything they create which would lead them to create good designs. Students also interacted with the designer to enrich their knowledge on the design process, inspirations, difficulties etc.

The President of Council of Architecture visited the institute on 29th January 2018. Focussed interaction with the Staff members regarding Academics was held. President elaborated on the current developments and reforms the Council is trying to bring in the future. He emphatically expressed his views for the betterment of the fraternity. He also spoke to students about ethics and practice in the changing times. Principals of other architecture colleges and senior professionals from the city were invited to the meet. Local professional body members from IIA, IIID were present for the same. Education Officer Dr. Nanasaheb Patil Welcomed the President. Principal Dr. Baste felicitated the dignitaries.